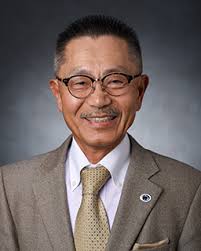 Kenji Uchino, a pioneer in piezoelectric actuators, is Founding Director of International Center for Actuators and Transducers, and Professor of EE and MatSE, Distinguished Honors Faculty of Schreyer Honors College at The Penn State University. He was the Founder of Micromechatronics Inc., State College, PA from 2004 till 2010. He was also Associate Director at The US Office of Naval Research – Global Tokyo Office from 2010 till 2014. After his Ph. D. degree from Tokyo Institute of Technology, Japan, he became Research Associate (1976) at this university. Then, he joined Sophia University, Japan as Associate Professor in 1985. He was recruited from The Penn State in 1991. Uchino is a Fellow of American Ceramic Society and IEEE, and also is a recipient of 29 awards, including Distinguished Lecturer of the IEEE UFFC Society (2018), International Ceramic Award from Global Academy of Ceramics (2016), IEEE-UFFC Ferroelectrics Recognition Award (2013), Inventor Award from Center for Energy Harvesting Materials and Systems, Virginia Tech (2011), SPIE Smart Product Implementation Award (2007), R&D 100 Award (2007), ASME Adaptive Structures Prize (2005), Best Movie Memorial Award at Japan Scientific Movie Festival (1989), and the Best Paper Award from Japanese Society of Oil/Air Pressure Control (1987).

Prof. Dr. Adriaan S. Luyt started his academic career in 1984 as a Senior Lecturer in Physical Chemistry at the Potchefstroom University (now the University of the North-West) in South Africa. In 1991 he moved to Vista University in South Africa as an Associate-Professor, and in 1993 he accepted a post as Professor at the Qwaqwa Campus of the University of the North (now part of the University of the Free State), also in South Africa. During 2014 he joined Qatar University as a Research Associate-Professor, and in 2017 he was promoted to Research Professor at the same university. His research focuses on the morphology-property relationships of polymer blends, composites and nanocomposites, and he successfully supervised 46 masters and Ph.D. students and 11 postdoctoral research fellows, and currently he supervises four PhD and two masters students. He published 225 papers in international journals and four book chapters. His publications have been cited more than 4000 times, and he has an h-index of 34. He and his students presented their work at numerous conferences across the world. In 2018 he received the Qatar University Research Excellence Award in the Sciences and Engineering category.

Wilson is affiliated with the Department of Chemistry at the University of Saskatchewan and is an Associate Professor with research interests that cover diverse topics in physical chemistry, materials science and environmental chemistry. Ongoing research activities are focused on the development of new types of materials and studies related to adsorption and interfacial phenomena related to water science and technology. The Wilson lab is developing new forms sustainable biomaterials for the controlled removal of contaminants from water and chemical separations using methods based on green chemistry. This research contributes to the science and technology of “smart” adsorbent materials and applications that range across water and energy security.